Spring Kit that completes the SFS springs for an entire 1911 optimizing.

This BHSS-Optimizing Spring Kit is the perfect complement to the 1911 Fast Safety system.  Contains all springs in the 1911 not otherwise replaced by springs contained in the Fast Safety product.  Includes 3 BHSpringSolutions Optimized Recoil Springs and Includes Recommendations for appropriate use of each Recoil Spring and information about Slide Velocity Synchronization from the BH-Knowledge Base.

The .45ACP cartridge was originally invented to achieve optimal ballistics from a 5″ barrel 1911.  Shortening the barrel for the same size ammunition always presents certain challenges – primarily, controlling the same amount of energy and recoil with less Recoil Spring, since the Recoil Spring must become dimensionally shorter when the barrel is shortened.  Shorter life of the Recoil Spring is a predictable by-product of this compromise.   Users of the 1911 Commander .45ACP / 4.25″ Barrel should embrace replacing the Recoil Spring at intervals not exceeding 3 years or 3,000 rounds fired.

You accept that it is solely your responsibility to assure that any firearm you may own, possess, handle or work on, is completely unloaded and handled in a safe and responsible manner at all times and that you hold harmless BHSpringSolutions LLC, its employees and officers, from any and all liability resulting from use of firearms.

You acknowledge that it is your responsibility to assure that your firearm(s) are functioning in a safe and reliable manner and that if not, whether you have installed a BHSpringSolutions LLC product or not, you will take any and all measures, including repairs by a qualified Gunsmith, required to correct such issues before loading and using your firearms. 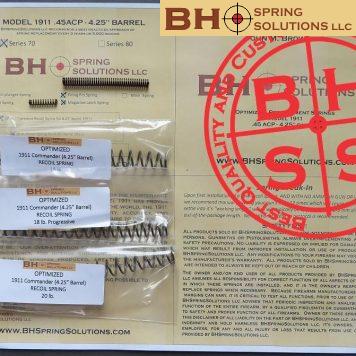